The fifth Shenzhen International Low Carbon City Forum will be held at the Low-carbon City Exhibition Center in Longgang District from Sept. 7 to 8, announced the forum’s organizing committee Aug. 24 at the Shenzhen Civic Center. 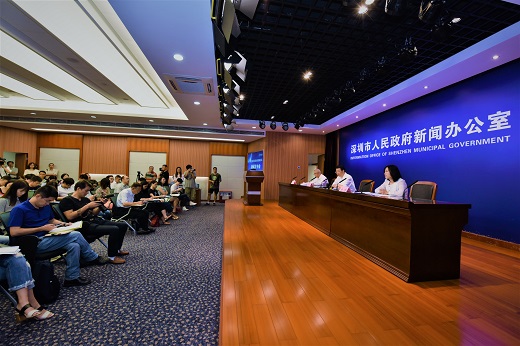 Shenzhen International Low Carbon City Forum has been successfully held for four sessions consecutively and has constantly expanded its influence at home and abroad. This session of the Forum, which will be held at Shenzhen International Low Carbon City (ILCC) Convention Center, consists of 1 main forum, 6 sub-forums, 4 workshops and a series of supporting activities, covering many aspects including the experience and practice of South-South Cooperation, the goals and paths of low-carbon city development, the opportunities and challenges of energy revolution, the innovation and practice of green financial system, and the responsibilities and undertakings of low-carbon enterprises. Up to now, the forum has attracted nearly 2000 guests from more than 40 countries and international organizations. Among them are Liu Yanhua, counselor of the State Council, director of the National Committee of Experts on Climate Change and former vice minister of the Ministry of Science and Technology; Du Xiangwan, academician and former vice president of the Chinese Academy of Engineering and honorary director of National Committee of Experts on Climate Change; Francesco Profumo, former Italian minister of education and former president of Italian National Research Council; He Jiankun, vice director of National Committee of Experts on Climate Change; and Wang Shi, Honorary board chairman and founder of China Vanke Co. and president of Vanke Foundation, all of whom will make keynote speeches at the forum to expound the long-term significance and important role of green, low-carbon and sustainable development from the global viewpoint.

According to the organizing committee, the forum this year will consistently adhere to the development concept of innovation, coordination, green, openness and sharing to serve China’s action in response to climate change and Belt and Road Initiative, serve the industrial transformation and upgrading and the supply-side structural reform, showcase the latest green and low-carbon achievements in an all-round manner and give better play to its role as a platform for promoting the practical exchanges in the green and low-carbon field and deepening international cooperation. The forum includes the following characteristics:

Firstly, it is high-end. The guests to attend the forum include heads of Chinese national ministries and commissions, government officials of other countries, officials of the UN and other international organizations, renowned experts and scholars and entrepreneurs from home and abroad, who will have discussions and sharing on the hot topics concerning climate change, the problems occurred in the green and low-carbon field and the actions of cities and enterprises.

Secondly, it is professional. This Forum is up to the standards of high-level international forums such as Davos and Boao Forum for Asia. In terms of content, event planning, meeting organization, guest reception, service guarantee and all other aspects, it seeks to be professional and efficient.

Thirdly, it is international. Following the principle of “holding the forum in an open manner,” the organizing committee of the forum has invited the UN, World Bank, Global Environment Facility, World Wildlife Fund, C-Team and other well-known international organizations in the field of climate change to jointly hold the forum. Besides, a theme event “Italy Day” is specially set to highlight the internationalism of the forum.

Fourthly, it is effective. The Forum will give full play to its role as a platform and center round China’s action in response to climate change and Shenzhen’s actual needs to strengthen the matching of projects, resources, capital and technologies and to realize practical cooperation. During the forum, 19 low-carbon technical projects and over 30 well-known capital investors from home and abroad will jointly participate in the International Low-Carbon and Clean Technology Road Show.

Fifthly, it is low-carbon. The forum will apply IT and smart methods to maximally use green and recoverable materials for the arrangement of the meeting places, so as to minimize the use of paper materials and disposable products. On top of that, new-energy vehicles will be used throughout the forum.

According to the organizing committee, the fifth forum has taken on some new look in content, activity and service organization. In its contents, it has shifted from the concern about cities’ low-carbon development toward the regional low-carbon cooperation. In its setting, the focus has changed from quantity to quality. Though there aren’t many sub-forums, each of them is required to be made into an exquisite one. In its activity arrangement, the focus has shifted from professional technology to the promotion of industrial development.

The forum will for the first time launch the road show for international clean technology projects, and by then, 19 projects from home and abroad will participate in the road show, covering many fields such as new energy, clean technology and smart city. Apart from inviting more than 30 renowned Chinese venture capital institutions including Shenzhen Capital Group Co., Qianhai Wutong Mergers and Acquisitions Funds, Franklin Templeton Investments, Tamarace Capital, Fortune Venture Capital Co. and Green Pine Capital Partners, the forum has also invited Chen Yong, academician of the Chinese Academy of Engineering and Expert in Biomass Energy, Xi Wenhua, UN Expert in solar energy and Liang Dan, former head of Investment and Technology Promotion Office of the United Nations Industrial Development Organization (UNIDO) to attend the meeting. 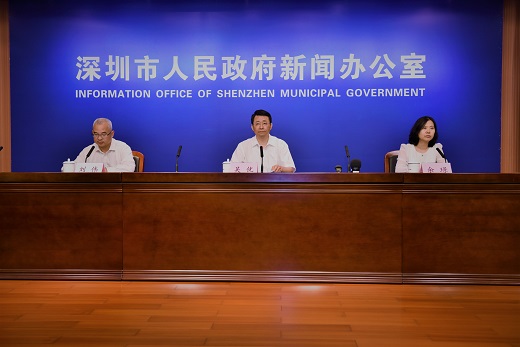 Scene of the Press Conference

Second is to promote innovation-driven development and constantly enhance the scientific level of green and low-carbon development. In the field of energy saving and environmental protection, we have laid emphasis on improving the innovation capability in recent years. We have fostered various innovative carriers, enhanced the innovation capability of enterprises and promoted the development of green and low-carbon industries. By the end of 2016, we had accumulatively built 109 carriers and platforms of various kinds, including engineering laboratories, key laboratories and public technical service platforms in the energy saving, environmental protection and low-carbon fields, and most of such innovative carriers have been built in enterprises. The enterprises with the output value of more than 100 million yuan (US$15.32 billion) in the aforesaid fields have obtained 32396 patent authorizations.

Third is to stress government guidance and promote the policy systems of green and low-carbon development. We have formulated and issued the local regulations and rules such as Some Regulations of Shenzhen Special Economic Zone on the Management of Carbon Emissions and the Interim Measures of Shenzhen for the Management of Carbon Emission Right Trading, and have taken the lead in carrying out the trading of carbon emission rights in the country. Besides, we have also set up the special support funds for strategic emerging industries and future industries. As is known to all, we have seven strategic emerging industries and five future industries, in which up to 5 billion yuan of municipal financial funds are invested each year, including the special funds for the development of new energy, energy saving and environmental protection industries. Besides, we have also set up special funds for circular economy and energy saving and emission reduction. Through constant promotion and development, the industries of new energy, energy saving and environmental protection recorded an output value of 324.8 billion yuan in 2016. Moreover, we have promoted the development of green finance. Five of the sub-funds approved by the Municipal Government’s Investment Guidance Fund have taken energy saving, environmental protection and low carbon as their main investment fields, and their total scale has reached nearly 4 billion yuan. We have also issued the Measures of Shenzhen for Promoting Green Buildings, China’s first government regulation on promoting the all-round development of green buildings, and Shenzhen ranks on the front among China’s big cities in the area of green buildings. Another highlight is our promotion of the use of new-energy vehicles. To date, we have accumulatively popularized the use of nearly 80,000 new-energy vehicles, including both big and small ones. By the end of this year, all the buses used in Shenzhen will be purely electric, which is rarely seen even in the world.

Fourth is to stress openness and cooperation, and facilitate international green and low-carbon exchange and cooperation. For example, we have strengthened the cooperation with international organizations in the field of climate change. With the support of the World Bank, Global Environmental Facility and World Wildlife Fund, we have conducted the research on Shenzhen’s actions in response to climate change which has further enhanced our ability of research on such topic. In the country, we have taken the lead in joining the C40 Cities Climate Leadership Group and have twice obtained the C40 City Award. On top of that, we have planned and constructed the Shenzhen International Low Carbon City to gather advanced low-carbon technologies from home and abroad and demonstrate the way of low-carbon production and living and the mode of city construction and operation. This project has become the flagship project for the China-Europe sustainable urbanization cooperation and obtained the “2014 Prize for Cities of the Future” granted by Paulsen Institute and China Center for International Economic Exchanges. 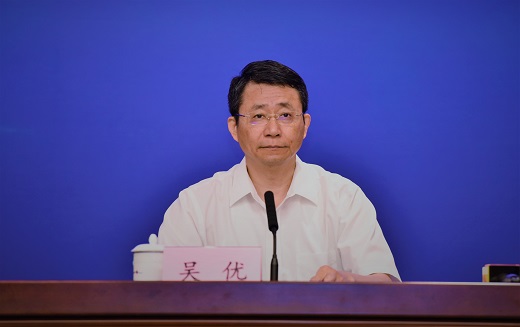 At the same time, Wu also pointed out the new highlights of the forum this year:

Firstly, in the arrangement of the meeting places, we’ll use environment-friendly, composite, new-type and recyclable materials. Besides, we strive for paperless meeting materials and reduce the use of disposable goods.

Secondly, in media coverage, we’ll promote the event through new media such as official website and official WeChat account so as to realize the real-time update of information and reduce the use of paper.

Thirdly, in the management of meeting affairs, we’ll adopt the IT-based means to handle the registration, check-in and sign-in of participants, the organization of meeting affairs, the guide of the venues and the dining guide. Besides, materials such as videos are also in digital form and will be updated real time to improve efficiency.

Fourthly, we adopt the intelligent power distribution and management system, and we have installed the advanced energy-saving metering device. Moreover, we employ highly efficient energy-saving lamps, change the manual control of lamplight to intelligent control and try our best to use natural light so as to attain the goal of saving energy.

Fifthly, we will adopt the green commuting throughout the forum. All the buses to be used for transporting the guests are all environment-friendly.

Shenzhen International Low Carbon City Forum has been successfully held for four sessions, setting several records: China’s first carbon trading market was launched here; the Shenzhen Declaration on Green and Low-Carbon Development of Pearl River Delta Urban Agglomeration was published here, which opened up a new chapter of cooperation in the green and low-carbon field; and the Seminar on National Low-carbon Pilot Cities/Towns and Campuses was the first seminar of its kind held in a local city outside the capital..

As a young city with a history of a bit more than 30 years, Shenzhen has created the miracle of rapid industrialization, urbanization and modernization. In the green, low-carbon and sustainable development, it has also made active explorations. Today, Shenzhen owns the carbon trading market that was the first one in China and has the most active transactions. Its carbon emission intensity and energy consumption intensity have been at the lowest level nationwide. Besides, the city has taken the lead in promoting the use of new-energy vehicles and green buildings, and its average concentration PM2.5 has been at the best level among Chinese cities of vice-provincial and above levels. Shenzhen will persist in taking the green and low-carbon road, strengthen the practical cooperation with all parties and jointly make unremitting efforts to achieve the city’s sustainable development.