Since the 12th Five-Year Plan, Shenzhen’s GDP has grown from1.15 trillion yuan to 1.95 trillion yuan, ranking No.1 in growth rate among the cities in Guangdong. Meanwhile, the energy and water consumption per 10,000 yuan GDP has dropped by 23.2 percent and 48.1 percent respectively for 6 six years accumulatively. The annual average concentration of PM2.5 has dropped from 42mcg/m3 in 2012 to 27mcg/m3 in 2016. The quality of drinking water sources reach 100 percent and the offshore water quality in the east is up to national Grade I standard for seawater. Green mountains and rivers, blue sky and white cloud together have become a new name card for the city. 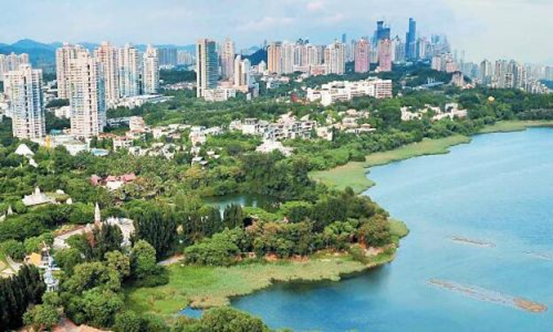 What makes Shenzhen, a city with a population of more than ten million, rank among the best of the 74 major cities under surveillance in air quality while ranking No. 1 in the country in terms of GDP per unit area? The answer is green development. In recent years, while vigorously developing its economy, Shenzhen has been making great efforts in building an innovative eco-system, steadily striding toward the goal of an ecological civilization city.

The most vigorous place of Shenzhen at present, in terms of green development, should be Shenzhen International Low-Carbon City (ILCC). Located in a rather remote area of Shenzhen where the low-end traditional processing industry can be found around the corner, the project has been granted with numerous honors in recent years. In 2014, it was awarded as “Outstanding Low-Carbon Case and Annual Low-Carbon Example in Low-Carbon China Tour” and the “Sustainable Development Planning Project Award” in Beijing. In 2015, it was listed as one of the first eight national low-carbon pilot cities (towns) and a major practice of Shenzhen in response to climate change and implementing the green and low-carbon development concept.

The design of every facilities of Shenzhen International Low-Carbon City, including squares, gardens and sightseeing platforms, has taken into consideration low-carbon and environmental protection.

Located at Pingdi Subdistrict, Longgang District in northeast Shenzhen, the ILCC covers an area of about 53 square kilometers. It has three missions namely, concentration, demonstration and exportation. According to statistics, the ILCC has altogether introduced 123 enterprises above designated size, 25 enterprises worth more than 100 million yuan and 21 national high-tech enterprises. It has been striving to create an international urban space to attract capital, high-end enterprises and talents.

The supporting facilities of the ILCC has been improved step by step, making it more and more suitable for living and doing business here.