At the conclusion of his service as the U.S. Secretary of Energy, Steven Chu returned to Stanford University to continue his study of physics. Steven Chu came to Sichuan to take part in the 2017 US-China Green Energy Summit held on September 11th to 13th.

It took him 14 hours to fly from California to Chengdu.  Though being nearly 70 years old, Steven Chu had tight schedule in Sichuan. He made a keynote speech titled "Climate Risks and Clean Energy Opportunities" at the summit on the morning of 11th, led a delegation to visit the Sichuan University on the afternoon, where he shared insights on carbon capture and utilization (CCU), and returned the summit venue and accepted a media interview on 8 O'clock on the evening. 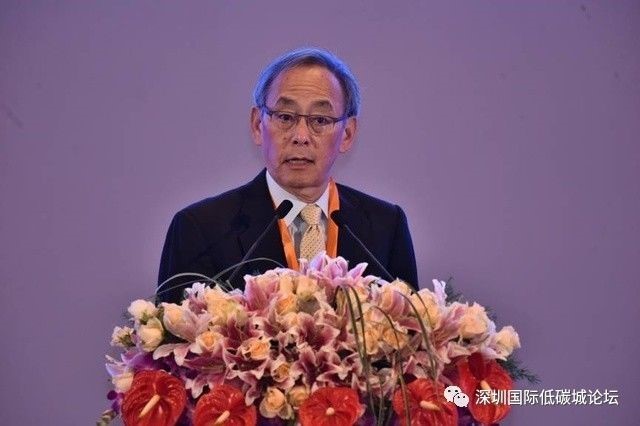 When talking about the energy cooperation betweenand the, Steven Chu said: "is now the world's largest investor in clean energy and the largest market of clean technology application.and thehave many opportunities for cooperation, and clean energy will be an important field."

“At present, fossil energy is still the main source of energy consumption in the world. Compared with wind, solar and other clean energy, the cost of coal-based fossil energy is cheap," said Steven Chu, “but as time goes on, the cost advantage of coal will no longer be attractive."

However, Steven Chu admits that any form of energy use has some demerits. For example, nuclear power is affected by the NIMBY effect; wind power and solar energy is unstable and intermittent; hydropower involves relocation and environmental issues. "But the mankind needs energy, and it's a complex process of choice and balance."

Steven Chu believes that the next step is to consider how to further reduce costs, as renewable energy has made considerable progress around the world. "Most of the energy in the future would come from nuclear and non-fossil power, though it will be a slow process," said Steven Chu frankly.

The Paris agreement sets a quantitative goal for holding the increase in the global average temperature to well below 2 °C. "Trump argues that climate change is a false proposition and has announced withdrawal from the agreement, but countries around the world have recognized the importance of addressing climate change," said Steven Chu frankly.

"Although the Trump administration announced withdrawal from the Paris agreement, the cooperation betweenand thewill continue to move forward. Some governors, university researchers and business leaders in theare making efforts to promote the cooperation with the world in clean energy. They are the backbone in cooperation between theand the world. The global efforts to address climate change will not stop," affirm Steven Chu.

During the interview, Steven Chu expressed concerns about emissions from fossil fuel vehicles, and shared the latest progress in research of power batteries for new energy vehicles. "Stanford University is studying fluid batteries. In the future, electric vehicles can complete charging in a short time with fluid batteries, improving the efficiency while protecting the environment."

As explained by Steven Chu, the fluid batteries for new energy vehicles can provide the energy for driving 100 - 150 miles after charging of 5 minutes. He also noted that some technologies of energy storage battery, which looks promising in science, are still in the laboratory stage and needs policy support, and have a long way to go before commercialization.

"and thenow have different energy needs. Thehas a variety of subsidies, giving higher subsidies for coal than those for other energy sources. In this context, the change in the energy structure mainly relies on promotion of advanced technology. The George W. Bush's administration reduced energy costs by about 1/4 through establishment of energy trading systems.and theare different in terms of policy, regulation and investment.has introduced many policies to promote new technologies, activate investment and underline long-term planning. When I worked as theenergy secretary, I fully supported the research and practice of carbon capture and sequestration, focusing on promotion of nuclear energy and non-fossil energy technology and calling for reduction of carbon emissions in the energy development process; otherwise it will damage to the interests of future generations," said Steven Chu bluntly.

"I'm looking forward to the development of clean energy in china," said Steven Chu, "has a huge clean energy market, and the government and enterprises are working hard to promote clean energy, which will bring new and broad opportunities for energy cooperation betweenand the."