Representatives from 196 countries from around the world gathered in Bonn, Germany to participate in the annual United Nations Climate Change Conference on November 6. Addressing the opening ceremony, the big names included the Executive Secretary of UNFCCC, the Prime Minister of Fiji and the chairman of conference, the German environment minister and the mayor of Bonn, but everyone was careful not to mention the United States, or Trump, whose name was a taboo.

Many representatives were still in the shadow of last year's conference in Marrakech, where 196 countries finally reached the Paris Agreement in 2015, and the conference last year was expected to discuss how to implement the agreement, when Trump was elected president of the United States. Members of the United States delegation shed tears as the years of negotiations and efforts went down the drain.

It was no surprise when Trump announced withdrawal from the "Paris Agreement" in June this year, pouring a bucket of cold water to the global efforts for emission reduction.

This year's conference in Bonn was the first of the signing parties after the withdrawal of the United States. Many experts point out that the United States may still interfere with key "outstanding issues" for implementation of the Paris agreement and hinder the process, if it remains a party to the United Nations Framework Convention on Climate Change before 2020 when it formally withdraws from the "Paris Agreement".

Hundreds of NGO volunteers demonstrated outside the venue as early as the weekend before the opening of the conference. People shouted slogans, held balloons and banners, and called for emission reduction. Volunteers set up a 3-meter high Statue of Liberty, whose book on her hand bearing the words of "Freedom to Pollute", satirizing the US's withdrawal from the Paris Agreement. 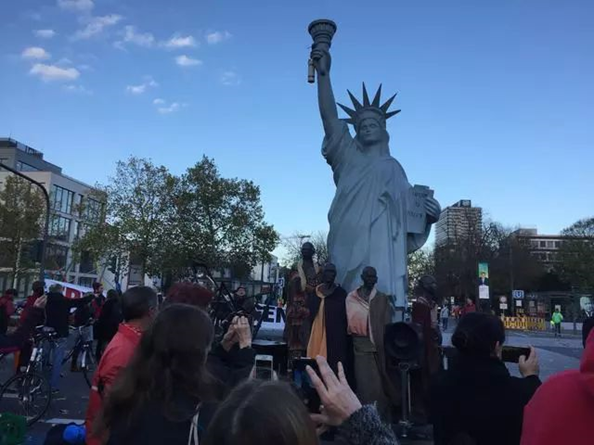 A Statue of Liberty was set up by volunteers outside the venue of conference, and the book on her hand bore the words of "Freedom to Pollute". Picture taken by Sun Ying.

At a workshop held by G:HUB, an environment NGO recently, Fu Sha, Research Associate at National Center for Climate Change Strategy and International Cooperation, noted that the emissions by the United States in 2030 emissions were likely to reach 5.79 billion tonnes of CO2e in 2030 after Trump's withdrawal from the Paris Agreement, only 12.1% lower than the level of 2005. If the gap were to be filled by the EU, the emission reduction commitment of EU in 2030 would be increased from the original target of 40% to about 70%.

Moreover, after the US withdrawal from the Paris Agreement, it will leave at least USD 2 billion dollars unpaid to the Green Climate Fund, accounting for 81% of overdue funds, excluding the impact of exchange rates. If the gap were to be undertaken by Japan and EU countries, the contribution of each country would be increased by about 40%.

As the United States set back, the world is wondering: would China take the role of a leader of global climate actions, and what change would happen to the relationship between China and the United States as Trump was about to visit China.

"The China-US relations remain a key part of China's diplomacy. Climate change was once a focus of the relations between the two countries. Though it is not as bright as before, it is unnecessary to be a forbidden topic or a source of friction," said Fu Sha.

She believes that China should seize advantages and avoid disadvantages, make use of the relationship among different parties, and avoid speculation over the “leadership": "A country's leadership is not self-claimed, but a matter of course. We should not be blindly optimistic while not improperly belittling ourselves. China should fully evaluate its strategic position as a major developing country and a responsible major country, and have a clear understanding of whether it have the ability to take over the leadership from the US. We should allow for unforeseen circumstances.”

The chair of the conference this year was Fiji, which is a small island country. Because Fiji was unable to hold the event on its land, Bonn, Germany, where the United Nations' climate change agency is located, became the site of the conference.

Barbara Hendricks, German Federal Minister for Environment, said at the opening ceremony that she was a university student in Bonn, and welcomed the nearly twenty thousand participants from around the world on behalf of the Bonn people. "In Paris, we went hand in hand. Now we should be united tighter.”

This year, the organizer specially set up two conference centers named the Bula-Zone and the Bonn Zone. The former was the main place for negotiations, and "Bula" is a word from Fiji, meaning "hello", implying a wish for health and happiness. The Bonn Zone is 1.4 kilometers away, mainly for holding side meetings and exhibitions.

The Bula Zone, the main place for negotiations, is located near the Bonn World Conference Center, Germany 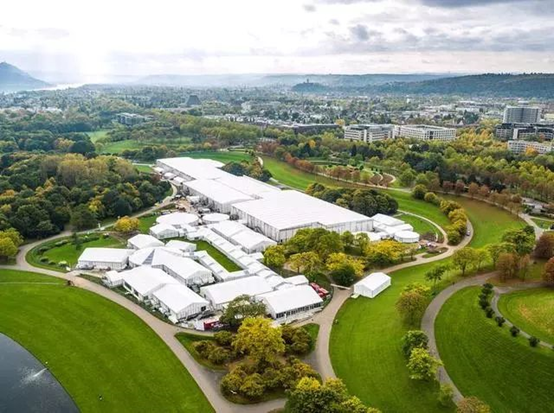 "Setting up two zones will allow more NGOs to participate and express their voices," said Minister Hendricks. The intention was obvious: Without support from the most powerful country, the conference has to find other sources of "power".

"Every dollar invested today in the emission reduction will be changed to clean air, healthier life and a better future. We have to leave a world where children can live healthfully.”

Her announcement that Germany would invest further EUR 50 million euros in the Adaptation Fund was followed by a long applause. The people needed to cheer themselves up desperately.

"There Is No Time"

All the speakers mentioned, “there is no time."

"We cannot go back, and we must go all out to implement the Paris Agreement, because we don't have much time left," said Hendricks. In spite of mentioning the United States, she pointed out that human beings would have no chance to turn back if the promise made in Paris were abandoned.

"All human beings are on the same boat," said Frank Bainimarama, the Prime Minister of Fiji, and chairman of the conference. "We can't let the people down. In the next two weeks, we must do our best to get the Paris Agreement materialized.”

"We have never had such a sense of urgency. Millions of people around the world suffer from extreme weather, but the fact is: this is probably the beginning of greater disasters," said Patricia Espinosa Cantellano, Executive Secretary of UNFCCC. "We really don't have time. We must act now.”

The World Meteorological Organization released a report on the opening day, saying that 2017 is one of the three hottest years since 1850, and the number of extreme weather events has hit record high this year. In 2017, many severe weather events have happened, including catastrophic hurricanes and floods, health-threatening heat waves and droughts. Long term indicators of climate change, such as the increase of carbon dioxide concentration, sea level rise and ocean acidification, have no sign diminishing. The Arctic sea ice coverage is still lower than the average, while the previously stable Antarctic sea ice coverage has been at or near the record low.

What will the United States do?

People are wondering what kind of role the United States will play at this conference.

Firstly, who will be the head of the United States delegation? Former U.S. climate envoy Todd Stern, who led the US delegation since 2009, stepped down after he helped hammer out the Paris Agreement in 2015. Jonathan Pershing, the head of the US delegation at the conference 2016, had just been in office for seven months and was sad to learn that he was going to lose his job during the conference. Finally, Thomas A. Shannon, Jr. Under Secretary of State will be the head of the US delegation. He is a senior diplomat at the age of 59, in charge of political affairs in the US Department of State. Experts are somewhat relieved: it would be a trouble if Trump appointed a fellow who tends to deny climate warming.

According to the data provided by the organizer, the United States delegation consists of only 48 people this time, less than half of that to the Paris conference in 2015.

To be honest, the atmosphere is a little strange. For the first time in years, the United States delegation did not give out any release before the start of the conference. Different from the bustle in previous year, the office of the US delegation has been closed with only a note posted at the door, asking journalists to send their questions via e-mail.

It is also the first time in years, that there is no US pavilion.

"I think that the United States will not have a particularly big action at this conference, neither being particularly negative or specially creating contradictions and tensions," said Li Shuo, senior consultant with Greenpeace, who has been tracking the UN climate conference for seven consecutive years. He believes that the conference this year is more likely to handle matters related to procedures, and the final results depend on the “facilitating dialogues the next year", so no dramatic decision is expected at the session this year. "Except for special circumstances, the United States is not necessarily to shout out loud. The other countries also know very well not to stimulate the United States. "

This seems to be the case at the moment. Before the official opening of the conference, the parties took time of the weekend to have a round table meeting. According to Gou Haibo, the special representative of the Chinese Ministry of Foreign Affairs to climate change negotiations, although the head of the United States delegation has been replaced, but the members are still those we dealt with before. "We have found no strange action of the United States delegation.”

Unlike the US government keeping a low profile deliberately, California governor Brown and former New York Mayor Bloomberg announced participation in the conference with a lofty tone. Although they were unable to enter national negotiations, they decided to say "we still having knowing people of the United States" by joining the conference. They are to announce the resolution of more than 250 American cities for emission reduction during the conference.