Being called a "tree fanatic", a "tree nerd" or even a "psychopath", Cao Zhawa from Hohhot Tolgoi Gacha in Chengchuan Town, Etuokeqian Banner, Inner Mongolia Autonomous Region is a herder who speaks fluent Mongolian and spends way more time in tree planting than sheep herding.

People respect this old man's ardent love for trees but find it somewhat hard to understand. 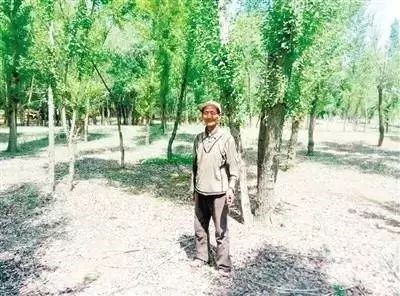 Since he was 16 years old, Cao Zhawa has started to tie his life closely to trees of whatever kind and remained so for more than 40 years. His house was completely surrounded by trees, which even extended to its walls. When being asked about the total number of trees he planted, the elderly waved his hand and said: "I don't know and never cared to count".

According to officials of Chengchuan government, Cao Zhawa has planted trees in a radius of 2000 acres of grassland, the varieties of which include elm, poplar, willow, carambola and salix mongolica, with trunk diameter reaching up to 1.5 meters.
As early as 1992, he was awarded the "Advanced Worker for the Construction of Three-North Shelterbelt" by the then State Forestry Administration of China. It is estimated that 1 hectare of broad-leaved forest can absorb 1 tons of carbon dioxide a day, making 750 kilograms of oxygen. As such, the forest made by Cao Zhawa can absorb over 48,600 tons of carbon dioxide and produce 100,000 tons of oxygen a year.

According to assessment made by relevant experts, Cao Zhawa has planted about 100,000 trees in decades, equivalent to an asset value of more than RMB 15 million. However, this "multi-millionaire" always appears in ragged cloth with dishevelled hair and a dirty face. He even does not have complete bedding and just eats instant noodles when hungry and drinks plain water when thirsty. For him, tree planting is the only thing that requires utmost discretion. Other than cutting some trees to build his house, he has never sold any tree for economic reasons. In a densely covered grove, Cao Zhawa told others: "I can only think about the trees every day. It's like an addiction, I can't help it."
For over 50 years, Cao Zhawa's life has been all about the trees. All the furniture in his room, even his kang, is made of wood. This "Tree Fanatic" is always doing things for or thinking about trees from morning till night every day, even overnight sometimes. His life is all about culture of seedling, digging, planting, watering ... sheep herding is only a "distraction" for him.

Earlier years, in order to save the time for earning workpoints and improve the efficiency of tree planting, Cao Zhawa would go so far as only digging a tree pit during the day and leaving all other tree planting works for the night. He even would not rest during the winter as he is busy with forest and fire prevention every day.

The old man said he is still young and has no problem working for another decade: "the older I get, I feel more energetic and longing for work". A few years ago, his wife and children left to live in the city area, but Cao Zhawa could not leave his "tree world". "As long as the pasture can be cured, I'm happy to dedicate my life to trees" said Cao Zhawa.

The twilight of the sunset sprinkled through the branches to the gully but resolute face of Cao Zhawa. Despite the white hairs creeping up his head, he will still hold on to his vivid dream: "I won't stop planting trees until my death. It is OK for me to die among the woods."