On July 18, the Chinese Ministry of Environmental Protection submitted a document to the World Trade Organization (WTO), demanding the urgent adjustment to the list of imported solid wastes and planning to ban the import of 24 solid wastes in 4 categories by the end of 2017, including household plastic waste, vanadium slag, unsorted waste paper, waste textile and other high-pollution solid wastes.

In its filing with the WTO, the Chinese Ministry of Environmental Protection pointed out that “it has been discovered that plenty of high-pollution garbage and hazardous wastes are mixed in the recoverable solid wastes and this has seriously polluted China’s environment. To protect China's environmental interests and people's health, we urgently need to adjust the imported solid wastes list, and forbid the import of solid wastes that are highly polluting.” 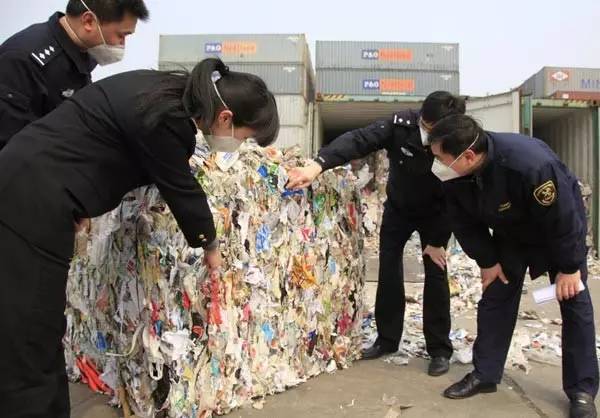 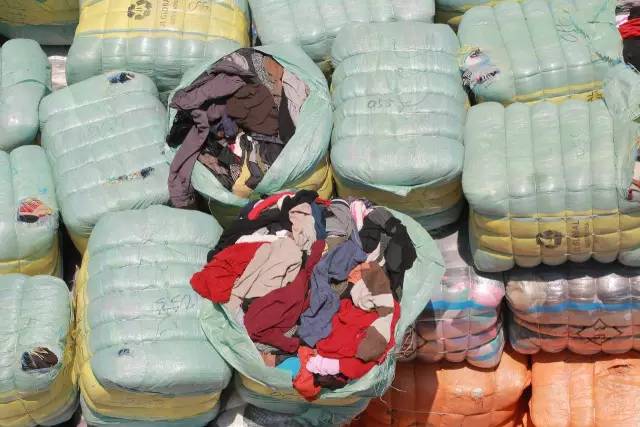 “Foreign garbage” clothes are no longer news in China and after being refurbished, they often turn into the “remaining goods for foreign trade.” Visual China.

In recent years, cases of smuggling “foreign garbage” are often seen on the newspapers and have aroused high attention among the public. Many people indignantly resent the imported “foreign garbage,” thinking it an act of bringing calamity to the country and people.

On April 18, the 34th meeting of the Central Leading Group for Deepening Overall Reform deliberated and adopted the Implementation Plan on Banning the Entry of Foreign Garbage and Promoting the Reform of Solid Waste Import Management System, which improves the management system of solid waste import, drafts out the schedule for banning the import of solid wastes based on industries and categories, adjusts the import management catalog in groups and categories, and makes deployment to drastically reduce the import categories and quantities through the integrated application of legal, economic and administrative means.

Cracking down on the smuggling of “foreign garbage” cannot work without governance transformation. And only by changing the extensive development mode of low-end garbage recovery enterprise can they really transform from pollution treatment to ecological recycle.

Reactions of the U.S.

Such huge turnover has also hastened the appearance of an enormous industrial chain. Robin Wiener, Chairman of ISRI, said that 155,000 jobs of the U.S. depend on the U.S. export of garbage to China.

David Biedermann, CEO of Solid Waste Association of North America (SWANA) said in a written statement, “I haven’t carefully read the document submitted to the WTO by the Chinese side. The list of wastes banned by China for import still needs to be further clarified. But it can be estimated that this matter will pose serious challenge to the waste recovery and treatment industry in the U.S. and Canada.

SWANA will discuss with the representatives of the Office of the United States Trade Representative and the U.S. Department of Commerce recently to work out a solution to this matter.” In the statement, SWANA also said that they have already drafted a written report on the impact of China’s ban on the import of “foreign garbage” on the relevant industries of North America and submitted it to the US Department of Commerce and Trade Office for review. 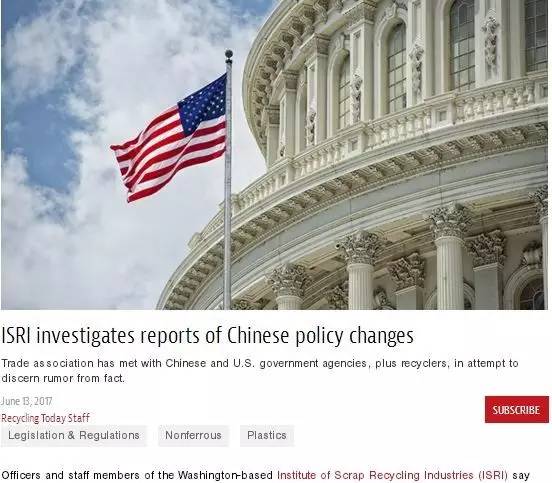 Robert Weiner, Chairman of ISRI, said in a statement:

“The scrap recycling industry is the first link in the global manufacturing supply chain. Recycled materials are key inputs into the production of new, usable commodities for the use in value-add production. In any given year, approximately one-third of the scrap recycled in the United States is prepared for shipment to the export market, and China is the recycling industry’s largest customer.

More than 155,000 direct jobs are supported by the U.S. industry’s export activities, earning an average wage of almost $76,000 and contributing more than $3 billion to federal, state, and local taxes. A ban on imports of scrap commodities into China would be catastrophic to the recycling industry.”

Progress has been made in China’s waste treatment technology.

Although the ban on the import of “foreign garbage” can reduce the damage caused by garbage to China’s environment to some extent, after all, China still needs to improve its own waste treatment ability to protect its blue sky and clear waters.

According to the research report of German-Sino Promotion Centre for Environment and Energy, the annual output of China’s domestic waste is about 400 million tons and increases at a rate of approximately 8 percent each year. This has posed a serious challenge to China’s waste treatment ability.

But the report also pointed out that China has made notable progress in its waste treatment technology in recent years. In the past, the simple and low-cost sanitary landfill is China’s main method of disposing urban domestic waste, but in recent years, the coastal areas, where conditions permit, have begun to carry out the harmless and more thorough way of incineration for power generation. 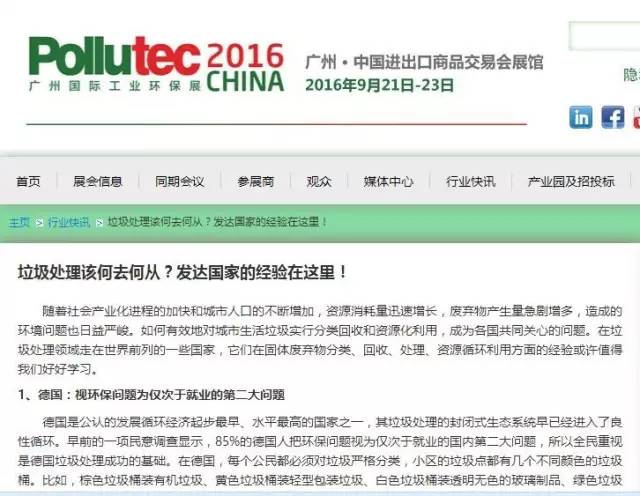 In sorting domestic waste, China is also learning the advanced experience of Germany and Sweden and has gradually promoted and established the garbage classification system. In China’s current classification system, the domestic waste is classified as four categories, namely, recoverable waste, kitchen waste, harmful waste and other waste, and it may possibly be further segmented and perfected in the future.

From 2013, China began to carry out the “Green Fence” plan to strictly manage the quality of imported wastes and severely strike the illegal import of wastes. As of September this year, 24 wastes in four categories will be banned for import. From the world’s “wasteyard” to the gradual establishment of China’s own waste treatment system, China has taken an arduous but steadfast journey of environmental protection.