NEWS CentralMEDIA
US climate report: Hottest year and no slow down in global warming 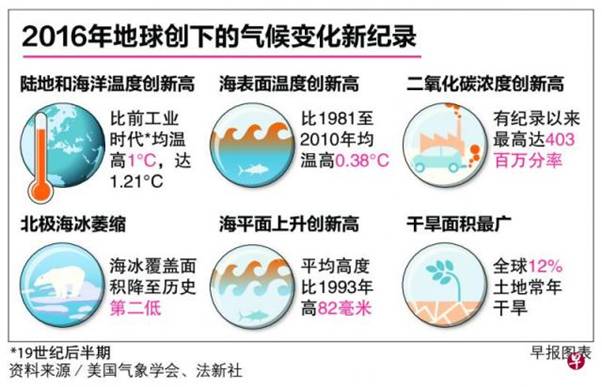 According to AFP news agency, the annual national climate report of the U.S. National Oceanic and Atmospheric Administration (NOAA) pointed out that, in 2016, the earth set many records, including the hottest year, the highest sea level and the most emissions of endothermic gases. These indexes, for which records were renewed the year before last, continued to scale new heights last year, showing that the tendency of the earth gradually becoming warm has no sign of slowing down.

This report compiled by nearly 500 scientists in more than 60 countries around the globe and published Aug. 10 stressed that human beings’ continuous dependence on petroleum energy source and the pollution of atmosphere by unprecedented emissions of greenhouse gases have resulted in the earth being unable to dissipate heat. The main greenhouse gases including carbon dioxide, methane and nitrous oxide, which cause climate warming, all recorded new high in their emissions. The global annual average atmospheric CO2 concentration was 402.9 parts per million (ppm), which surpassed 400 ppm for the first time in the modern atmospheric measurement record and in ice core records dating back as far as 800,000 years.

This report verified the previous news report, that is, the year 2016 is the hottest year in the modern history of observation. This is also the highest record of earth temperature renewed for three consecutive years, and both land and sea surface temperatures set new high. The ground average temperature of North Pole is 2 degrees Celsius higher than the average level during the period of 1981 to 2010, and compared with 1900 when records began to be made, it increases by 3.5 degrees Celsius.

The global oceans are floated with melted glaciers and ice caps and the global average see level reached a historical high last year, about 82 mm higher than the 1993 average. This also marks the sixth consecutive year global sea level has increased compared to the previous year. Over the past two decades, sea level has increased at an average rate of about 0.13 inch (3.4 mm) per year, with the highest rates of increase in the western Pacific and Indian Oceans. Meanwhile, the sea ice coverage at North Pole and South Pole has shrunk to the minimum area in history.

According to the report, “the high temperature record last year was jointly caused by the long-term global climate warming and the strong El Niño early in the year. The main indexes of climate change continue to show the tendency of global warming.”

The report says that climate change is one of the toughest issues faced by humanity. The extreme climate such as tropical hurricane has occurred more frequently. There were 93 named tropical cyclones across all ocean basins in 2016, well above the 1981–2010 average of 82 storms.

Mexico and India set the highest temperature record last year. At the end of last April, The north and east parts of the India Peninsula experienced a hot wave for one week and the temperature there exceeded 44 degrees Celsius, causing 330 million local people to be caught in water shortage crisis and leading to 300 deaths.

Last year, the scope under the influence of drought was rarely wide. At least 12 percent of the land surface experienced serious drought or worse phenomena every month. Drought conditions were observed in northeastern Brazil for the fifth consecutive year, making this the longest drought on record in this region.

El Niño, which results in the sea water being usually and continuously warming at the Pacific equator, was particularly intense in the first half of last year, bringing especially heavy rainfall to some areas. Flood repeatedly occurred in the South American countries including Argentina, Paraguay and Uruguay, and the rainfall in Eastern Europe and Central Asia was heavier than usual. Last year, the US California, which has experienced drought for many years, witnessed the most rainfall since 2012.

This latest climate report verifies the fact that the earth is continuously warming. However, just two months ago, the U.S. President Trump, who alleged that global warming was a hoax, declared the U.S. withdrawal from the 2015 Paris Climate Agreement. As the US is the country of the second most emissions of greenhouse gases, Trump’s decision has aroused lots of criticism from the international community.